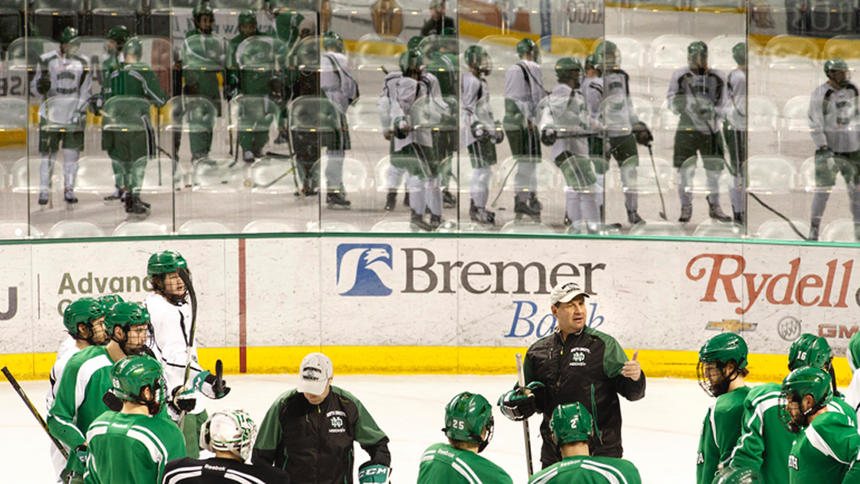 The Ralph to overhaul boards, glass

The Ralph to overhaul boards, glass

Ralph Engelstad Arena will overhaul its board and glass system this summer with the hopes of significantly improving player safety.

The installation will begin Aug. 22 and is expected to be done on Labor Day. The new setup will mirror most NHL arenas, featuring a new set of dasher boards and acrylic shielding to replace the old tempered glass. This will be the first time UND has replaced the dasher boards and glass since the arena opened in 2001.

There are three big safety measures:

“The biggest items, for sure, would be that the new system incorporates more safety features than any other dasher board system on the market today,” said Jody Hodgson, the general manager of Ralph Engelstad Arena. “I believe 28 of the 30 NHL arenas feature the same thing we’re going to put in.”

The acrylic panes will be a lot wider than the current tempered glass, which should make for better viewing for fans. They’ll be held together by a clear polycarbonate sleeve instead of stanchions.

The system also will have what it calls “curved terminations” to replace the turnbuckles by the player benches, too.

Another change that fans and players will notice is that the bottom of the boards are expected to be more lively. It should better allow players to pass to each other off the boards. Players also may be able to get pucks to the side of the net from points shots off the end wall—as long as they stay low and on the yellow kick plate.

The new dasher board system has better reinforcements behind the kick plate than the old ones to make them livelier.

“It’s also a flush dasher surface, so that eliminates potential for odd bounces on the ice,” Hodgson said.

Ralph Engelstad Arena also will replace the netting behind the goals. The netting currently sits at 14 feet. The plan for the new netting is to go a little higher to better protect fans in the top of the lower bowl.

About the author – Brad Elliott Schlossman

Schlossman is in his 11th year covering college hockey for the Herald. In 2014, he was named one of the top three beat writers in the country by the Associated Press Sports Editors. He has voted in the national college hockey poll since 2007 and has served as a member of the Hobey Baker and Patty Kazmaier Award committees.